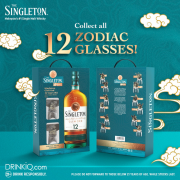 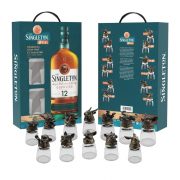 SINGLETON 12 Year Old ZODIAC Glass Collection Set is a smooth, rich and perfectly balanced single malt whisky. Fields of golden barley grow here in rich, dark soil. Water ‘from heaven and earth’ cascades down the White Burn river from two mountain lochs, one fed by springs, the other by rain. The traditional ways that shape The Singleton of Glen Ord have remained unchanged. Every skill and every ingredient used here is still found locally. Local barley is still malted and carefully dried at the distillery. The long fermentation allows the whisky to develop its flavour slowly, simply and naturally, which makes it one of the best scotch whisky.

Launched in 2011 in India, in more modern times, the iconic whisky distillery released the outputs of three different distilleries in three different markets under the Singleton name. North America gets Glendullan, Europe gets Dufftown, and Asia/Pacific gets Glen Ord. Of these three, only Glen Ord used to have a fairly standard release as a single malt, though Glendullan was available as a Flora & Fauna bottling.