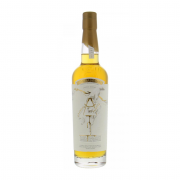 This release commemorates Compass Box’s ten year relationship with package design company Stranger & Stranger. It incorporates (1% of total) a one-year-old “sacrificial spirit” that was used to season experimental American oak barrels before finishing aging in refill hogshead. The spirit in question would be a grain whisky from Girvan, but as it’s under three years old, this spirit and the resulting blend does not technically qualify as a Scotch whisky. Also in the blend is a malt whisky from Glenlossie, aged in re-charred hogshead (80%); a malt whisky from Glen Elgin, aged in re-charred barrels (14%); and a malt whisky from Linkwood, aged in a sherry butt