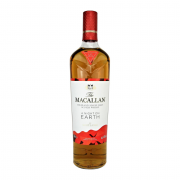 Macallan A Night on Earth

This stunning new Macallan Limited Edition was released to celebrate the New Year for 2022. It tells the story of Scotland’s most fmaous Hogmanay festivities, which attract thousands of visitors every year who revel in celebrating the change of the year in style. This bottling is a collaboration with acclaimed Japanese-French illustrator, Erica Dorn, who has most notable had artwork featured in Wes Anderson’s films.

It was matured in American and European oak sherry seasoned casks and American ex-bourbon barrels which have worked to impart a rich, sweet shortbread-like character onto the moreish, smooth spirit. It’s an apt flavour profile considering the rich Scottish delicacy is traditionally gifted and eaten at Hogmanay up and down the country. These notes are backed up by rich fruits, dried berries, hints of dried orange and winter spice.