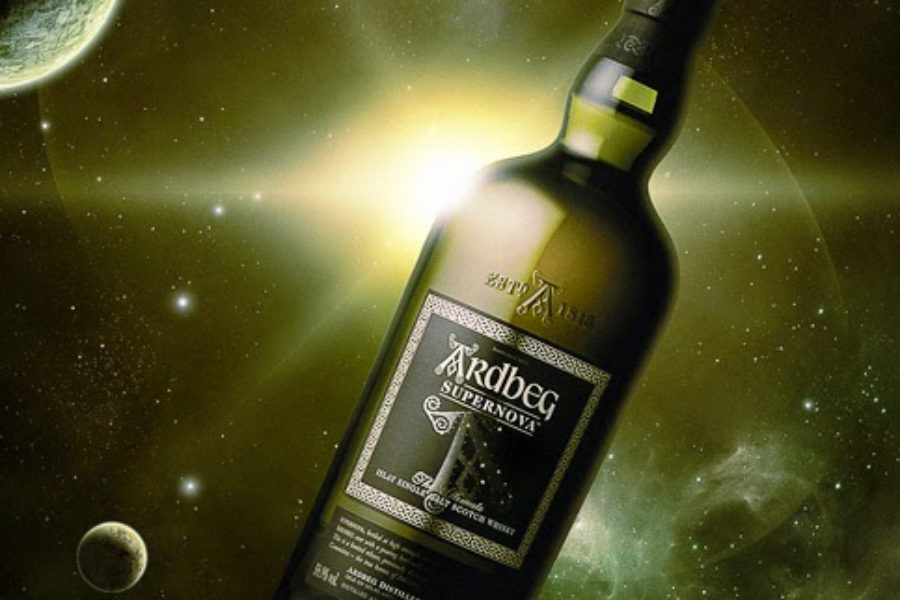 It’s not every day that a whisky brand sends a batch of their finest malts into outer space to be experimented on. Think of it as a PR stunt if you may, but in 2011, twenty vials of Ardbeg spirit and wood particles were sent to the International Space Station so that researchers could investigate their interaction. The vials returned on 12 September 2014, landing in Kazakstan with the readings and results.

Exactly how the effects of maturing whisky in zero gravity will affect future production techniques of the spirit is still unknown, but what’s more crazy than this experiment is the fact that Ardbeg distillery has closed down twice in its roughly 200-year history.

So how did this troubled distillery go from the pits to the moon?

Up and Down and To The Moon

The town of Ardbeg is a small settlement on southern coast of the island of Islay off the west coast of Scotland. Neighbours with Laphroaig and Lagavulin, Ardbeg’s main economy was centred around its distillery.

As whisky’s popularity (and legality) gained ground, the town began to grow. Ardbeg benefitted from its location – being grouped into the Islay whiskies category known for their heavy peat with smoky sea-spray character. Just by the association, Ardbeg could market itself with ease.

The distillery’s ownership changed hands a few times, and in 1853, it was even home to (allegedly) Scotland’s first female distillers – Margaret and Flora Macdougall, the daughter’s of Ardbeg distillery’s founder and original owner John Macdougall.

By 1887, Ardbeg reportedly produced 1.1 million litres of whisky that year. An uncanny feat at the time, the brand’s “A” in the Ardbeg logo and its logo itself are trademarked a few years later to deter bootleggers.

However, by the late 1970s, the global whisky downturn and mismanagement by then owners Hiram Walker, caused the distillery to close doors in 1981. Production resumed sporadically in 1989, but then the distillery went through a second closure in 1991. This time, its doors were shut until the Glenmorangie Company took over in 1997. Production was ramped up again and the first bottles of 17 Years Old, 1978 Vintage and Ardbeg Provenance were made. In a stunning turn of events, Ardbeg is named Distillery of the Year just 12 months later.

During its years of decline, the town of Ardbeg suffered as much as the distillery. Even though Ardbeg has been on the rise since ’97, the brand is not taking any chances which why they set up the world’s largest committee to safe-guard their brand’s heritage and reputation.

It’s a quirky fact that Islay, with a population of just 3000, has more than 140 committees. Considered the biggest one of all, The Ardbeg Committee, with a worldwide membership of over 120,000 and counting, is tasked with overseeing the quality of Ardbeg products. Best thing is, anyone can join it on their website.

Finally, to crave their name into history books, Ardbeg became the world’s first whisky to travel out of the stratosphere in an experiment to discover the interaction between whisky and wood particles in outer space. The answers to the mysteries of maturation and the universe were imminent. To commemorate this, the brand launched the Ardbeg Supernova 2014.

So when or if you’ve hit rock bottom, remember, space is the only limit for here on.

Discover the award-winning Ardbeg 10 Year Old and Uigeadail at our online shop now. For extra smokey and peat, try Ardbeg An Oa BBQ Smoker Package and Wee Beastie. We will deliver on the same day as your order!